Facing Aoyama-dori Street, the piloti space in front of Children’s Castle will become the stage of our outdoor programs.
The rain won’t stop us from dancing!

10.5 sun 16:30〜17:15
The origin of BOX, L’HOMME AU CARTON was Solo 1×60, created at the Yamaguchi Center for Arts and Media in 2006 in which, in the hands of the dancer, a box is transformed into a poetic object and the solo becomes a duet. This time, the 25-minute choreography has been adapted by the choreographer himself into a 45-minute piece to be performed outdoors by fifteen Japanese dancers.

The piece will be taught in the workshop to the dancers who to be selected through auditions prior to the showing on Oct 5.

Montreal is one of the few cities in the world where contemporary dance is an integral part of people’s lives. Together with Édouard Lock, Marie Chouinard and Ginette Laurin, Paul-Andre Fortier is one of the world-class dance artists from this city. Unlike the others, however, Fortier’s dance style is simple and clear, so much that it calls to mind American postmodern dance. In his recent popular piece Solo 30×30, Fortier dances a solo outdoors for 30 minutes every day for 30 days. This time he will present a solo and a group piece, but he won’t be dancing in either. He sticks to the role of the choreographer, so we can expect his choreographic style to be even more evident. Especially in Box, he will be working with Japanese dancers for the first time. It should be very interesting. (Tatsuro Ishii, Dance Critic) 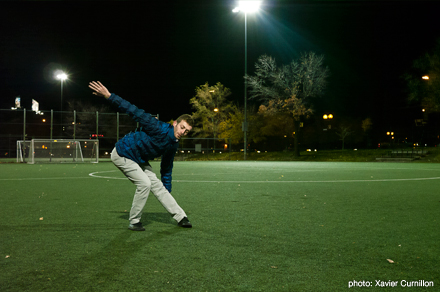 A former member of Nouvelle Aire, working with Édouard Lock, Ginette Laurin and other renowned dance artists in the 1970s, Paul-Andre Fortier has made an immense contribution to contemporary dance in Quebec over the past 30 years as a pioneering creator, performer and teacher. To now he has created a total of nearly fifty choreographies, solos, group works and site specific pieces. In 2010, he was appointed Chevalier de l’Ordre des Arts et des Lettres by the French government. In 2012, he received the Governor General’s Performing Arts Award and an appointment to the Order of Canada as Officer. Fortier came to Japan for the first time in 2004 to present Tensions at Dance Biennale Tokyo. He showed Solo 30×30 and Solo 1×60 at the Yamaguchi Center for Arts and Media in 2006. This will be his first visit to Japan in eight years.

After studying theatre and circus with Montreal’s National Circus School, Manuel worked for a time with Cirque Eloïze, then transitioned to dance. With a passion for diversity, he has explored a variety of dance worlds, from playful (Hélène Langevin), to more formal (Dominique Porte, Sylvain Émard, Paul-André Fortier) to theatrical (Peter James). He then spent three years dancing full time with Compagnie Marie Chouinard, where he also took part in creating Orphée et Eurydice. In May 2011, he performed the male solo in Les Feux dans la Nuit, choreographed by Marie Chouinard. In addition to his dance career, he has also choreographed a few works of his own (Brendon et Brenda, 2002; Ô mon bateau, 2004; RAW-me, 2010). In 2013, he founded Compagnie Manuel Roque to pursue his creative endeavours, including the In Situ project, which was performed at Montreal’s Place des Arts in January and March 2014.

On weekends and holidays during the festival, university students learning dance will perform their choreographies. 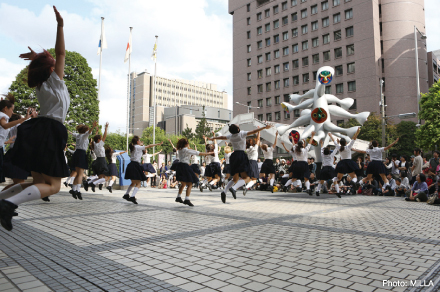 9.15 mon 16:30～ Nihon University volunteers
Die Tokyo Dance Crew『We Will Dance the Best We Can, So, Be  Nice to Us -ganbatte odorimasunode yoroshikuonegaishimasu-』
Von・no’s『As a mark of respect for AOYAMA』

profile
Die Tokyo Dance Crew
A “destructive” dance company founded by Kenji Shinohe and his friends. The dancers suddenly appear on the street, dance, die and disappear. Their aggressive and lively performances shock onlookers. “We dance and die right now!”

Von・no’s
The unit consisting of Yuki Kamimura and Kae Kubo was formed when the two graduated from the Nihon University College of Art in March 2014. This piece is performed by students of their alma mater.

profile
Keen on spreading its international network, the Club has toured Germany, Cuba and the US to introduce Japanese traditional performing arts (Japanese traditional dance, taiko drums and Ryukyu dance) while organizing self-produced and choreographed dance performances every year as well as participating in the All Japan Dance Festival Kobe and other competitions.

profile
Since the former Tokyo University of Education Dance Club was established in 1955, it has changed its name twice, to the University of Tsukuba Creative Dance Club in 1977, then to the current University of Tsukuba Dance Club in 1988. Celebrating its 60th anniversary this year, the club is proud of its distinguished history, as it has received the Minister of Education, Culture, Sports, Science and Technology Award at the All Japan Dance Festival – KOBE more than any other group. The club has been the home of many now professional dancers and choreographers working both in Japan and abroad as well as educators who are the leaders in dance education in Japan.