Dance is one of the origins of moving images. The sequential photographs used to document the movements of humans and mammals for research purposes, laid the steps for the birth of cinema. Along with the development of film as a media, dance gave birth to different new expressions, and those were documented as well in films. The influence of film as a media upon dance’s development could not be ignored. Conversely, film itself developed among the attempts to capture bodily movements. This program looks back upon the history of the “Century of Film and Dance.” This year’s dance film program at Theater Image Forum highlights films of historical importance picked from the Paris Cinématheque de la danse, the film version of the epoch-making performance by Belgian choreographer Jan Fabre, Doctor Fabre Will Cure You; and White Epilepsy directed by Philippe Grandrieux starring Hélène Rocheteau, among many others. 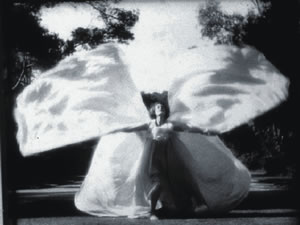 Loïe Fuller is well known for radically transforming dance shortly before the turn of the 20 century. She was a true embodiment of the Art nouveau movement, especially with her famous “veils in motion”. Native of Illinois – United-State, she was an actress before turning to dance. La Danse serpentine ( 1891 ) was her first successful choreography, in which she used the veils in motion, as well as colored lighting. In 1982 she is hired by the Folies-Bergère. One year later she registered a patent for her scenographic apparatus. After touring in England and in the United-States of America she came back in Paris in 1897 and performed La danse du feu ( fire’s dance ) and La danse du lys ( lily’s dance ) in the Folies-Bergères. The pavilion built by the architect Henri Sauvage for Loïe Fuller during the 1900 Universal Exhibition established her fame. She had contributed to the fame of Isadora Duncan, who was part of Fuller’s troupe for some time. In 1908 she founded a dance school which was called “Ballets fantastiques de Loïe Fuller” ( Loïe Fuller’s fantastic ballets ). After World War I she tried herself in cinema. In 1934, six years after her death it is her companion Gab Sorère who shot the movie La féérie fantastique des ballets de Loïe Fuller. 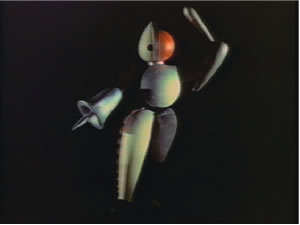 The man on stage becomes “happening” at the heart of this Gesamtkunstwerk which creates a triple harmony between dance, costume and which symbolizes the triad body, mind, soul. The artist, Oskar Schlemmer had polymorphous talent: He was a painter, a sculptor, a choreographer, a musician, a dancer and a composer. In 1921, he joined the Bauhaus as a Master of Form. With his dazzling interdisciplinary mind, he contributed to the inspiring decompartmentalization of artistic domains. As Laurence Louppe asserts “ In Triadic Ballet Schlemmer’s strength lies in the fact that he has made his costumes as if they were stories”. Every costume does dictate the set of doable movements to the body that is hold. Every costume is a choreography which chooses a certain amount of pre-selected gesture while inhibiting the others. 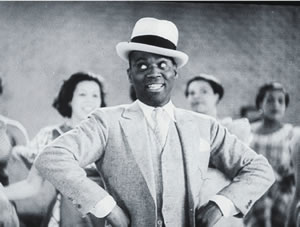 Jo Milgram (1916 – 2005) discovered Jazz when he was a teenager, when he purchased an Armstrong’s 78 rpm record in a flea-market in the 1930′s. Thanks to his ardent enthusiasm, he quickly befriended musicians who were passing through Paris – especially in Saint-Germain-des-Près. He was Boris Vian’s brother in arms as well as Charles Delaunay’s and Maurice Cullaz’s. he discovered Django Reinardt thanks to Pierre Nourry who hosted the Hot Club de France. He attended Louis Amstrong’s, Cab Calloway’s, The Cotton Club’s lives at the Moulin Rouge. In 1970 he began collecting Jazz films at a time when “ there were still interesting catalogs in Hollywood but if we did not cling to them they would have disappeared”. During thirty years and with Daniel Filipacchi’s help, Jo Milgram gathered together one of the most beautiful collection of Jazz films, which is said to amount to more than two hundreds hours of cinematographic images. 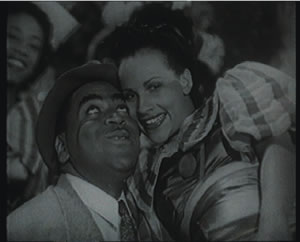 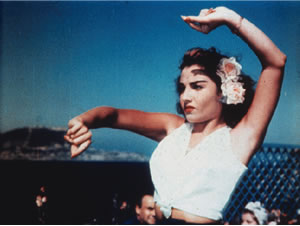 In 1951, the Spanish novelist Egard Neville, who was one of Jean Cocteau’s close friends, went to Andalucia to shoot what has been considered as the most beautiful documentary fiction about flamenco : Duende y misterio del flamenco ( Charms and mystery of flamenco ). This travel diary takes place in one of the most breathtaking landscape in the world : Jerez’s hills burned, epic village of Ronda, by the sun ( where Rilke lived and legendary place of bullfighting ), the languid banks of the Guadalquivir, whose either tempestuous or quiet currents are believed to have given birth to the flamenco’s heart and soul. Like Jazz, Flamenco was born from rebellion and from the furious desire to live. Its empire spread like wildfire from Seville to Granada, from Cadiz to Cordova. These names are covered with honey and alcohol scents which carry us in a sensual dream to the gate of Orient. The magic of this work lies in its rhythm, in the feeling of slowness and drift soothed by the cante jondo, in this unique way of blending landscape sensuality and the soil’s grain to the beauty of the dancers’ bodies. The Dancers are then drawing arabesques and a mystery where death and pleasure are intertwined. Refusing any effect of dramatization the movie establishes a direct confrontation with reality : this work is in the same vein as Flaherty’s Lousiana Story and Murnau’s Taboo. Cult movies where the realism is built up in the sacred. Some of this cinematographic poem virtuosities are forever unforgettable : Antonio at Ronda, Rosario Escudero, Pilar Lopez, Manolo Vargas and many more … to eternity. Patrick Bensard. 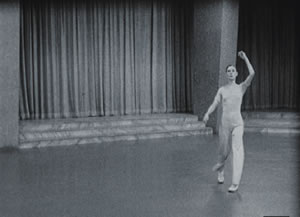 In 1979, when Lucinda Childs created Dance she called on Philip Glass to compose the music and on the artist Sol Lewitt. The latter shot the movie which was then released at the forestage, on a huge transparent screen through which the stage could be seen. Dance is regarded as an enchanting work in image history because of the superposition of the dancers on stage and those in the movie, the rhythmic interlacing, the play between apparition and disappearance, the split-screens revealing some sections of the space. It is really a contemporary dance masterpiece, thanks to Philip Glass’ ecstatic repetitions as well. Xavier Baert 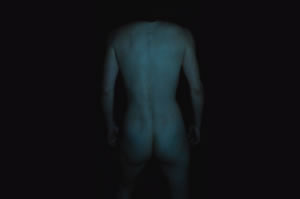 White Epilepsy is the first opus of Philippe Gandrieux’s tryptic in progress, in which the notion of anxiety is addressed. White Epilepsy, Meurtrière, Unrest are the three core movements, which all consist of a performance, a movie and an installation. The performance was performed by Helene Rocheteau at the Metz’s Pompidou Center in 2011. 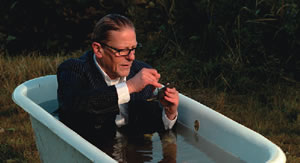 Fictitious portrait of the Flemish artist Jan Fabre, based on his diary, his visual works and his performances. The film -a modern fairy tale- projects Jan Fabre into his own imaginative universe and composes a character who changes ceaselessly identity, plays numerous roles under the most varied disguises; behind a mask, still another mask… The female character, like a ‘demon of passage’ using different faces, haunts the male character and inspires his metamorphoses, ad infinitum. 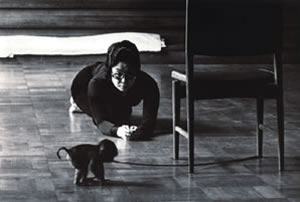 This is a documentary film that depicts artist Suzushi Hayanagi, who has choreographed for, and deeply influenced the theater director Robert Wilson, well known for his involvement in Einstein on the Beach and in otherworks. Suzushi, who had been studying ‘Jiuta-mai,’ a form of traditional Japanese dance from when she was a child, moved to New York alone in 1960, and then studied under Martha Graham. After she was introduced to the blossoming contemporary dance movement, she started to perform original dance pieces in the United States. Wilson, who had been strongly impressed by her choreography, invited her as a choreographer, later forming a collaboration producing Knee Plays in 1984, and 15 more works. When Wilson was notified about Suzushi being in a nursing home in Osaka suffering from Alzheimer’s, he goes to meet her. Suzushi never spoke a word, but the two communicated with the movement of their hands. Suzushi Hayanagi passed away in 2010.

Every film in the program will be projected digitally.