This artist-in-residence program began in the summer of 2013 in Romania, and continues at Kinosaki International Arts Center, Hyogo and Morishita Studio, Tokyo from August this year. There will be showings of the work-in-progress and a related workshop.

venue: Children’s Castle, 10F
Admission Free
The participating artists will talk about the project. * with interpretation 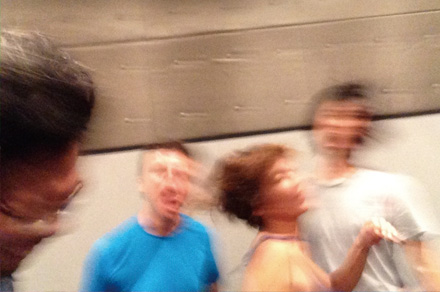 This is not one of those ordinary “Cultural Exchange Programs”. It is unique in that it is not just an exchange of artists but also producers and critics, sent to the respective countries to participate in discussions and creations. This is because “producers and critics are the ones who link society and artists, so they too should expand their knowledge and experience together,” says program director Cosmin Manolesc, who is also the director of Gabriel Tudor Foundation and the contemporary dancer/choreographer who led the dance scene in post-Ceausescu Romania. Last year Japanese choreographer Zan Yamashita went to Romania and through auditions chose the former-dentist-turned-contemporary-dancer Mihaela Dancs. As part of this exchange program they were joined in Bucharest by Shinji Ono (the producer of Festival Dance New Air) as producer, and myself as dramaturge. This year a team from Romania is in Tokyo for two months for creative research, and is expected to present a work in progress at this festival. (Takao Norikoshi, Writer, Dance Critic)

Cosmin Manolescu is choreographer and artistic director of the Serial Paradise Company/Gabriela Tudor Foundation based in Bucharest, Romania. His choreographic works have been presented at important festivals around the world. Manolescu has played an important role in the development of contemporary dance in Romania and in the creation of National Dance Centre in Bucharest. He is currently interested in cross-cultural exchanges, experiments and artistic innovations, creating performances that challenge the audience.
http://zonadstudio.wordpress.com
www.e-motional.eu

A former dentist, Mihaela Doncs is now a performer and choreographer based in Bucharest. Since 2004, she has danced for many other choreographers and made a number of solo works and collaborations with other artists. Doncs the Movement Labs sponsored by the National Dance Centre, and heads a social insertion project and arts education program for children with different social and educational backgrounds.

A dance critic, Takao Norikoshi is the director of Japan Dance Plug Co., Ltd., and works as an advisor for various theaters, foundations and festivals. In 2006, as a fellow at the Japan Society, he went to New York to do research on dance in the US. In 2007, he was the director of the“GIAPPONE DANZA”dance festival in Genoa, Italy. Norikoshi has written various books on contemporary dance, including: The Perfect Guidebook To Contemporary Dance; I Know You Don’t Go To Dance Performances; and THE DANCE BIBLE.

Starting in February 2013, this collaboration project has gathered artists from Croatia and Japan in five residency periods. Multi-award winning Japanese dancer and choreographer Mikiko Kawamura and young Croatian musicians Alen and Nenad Sinkauz, joined by Croatian multimedia artist Ivan Maru_ic-Klif, are working together on will show the work-in-progress of the genre-crossing performance piece. 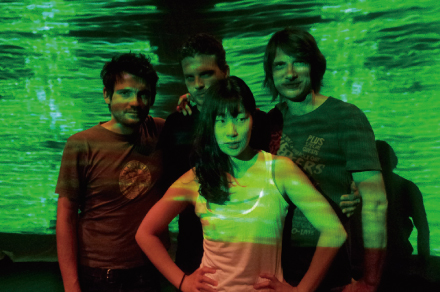 The Domino Project is a radical, international arts exchange program between Japan and Croatia, the country located in the Balkan Peninsula in Eastern Europe. Conceived and directed by Croatian producer Zvonimir Dobrovic – the man behind the ambitious Queer Zagreb and Perforations performing arts festivals – this is a small but spicy and spiky initiative with such provocative collaborators, and the only counterpart possible from Japan is none other than enfant terrible Mikiko Kawamura. It was only a couple of years ago that this female dancer stunned the local dance community as if she had landed on Earth from another planet. Bridging the distance between the two countries, this rare, now-or-never kind of creative explosion will be generating sparks this fall. (Tatsuro Ishii, Dance Critic)

Leading figures in Europe’s experimental music scene, the Sinkauz brothers established the avant garde rock band called East Rodeo in 2002 in Italy where they were studying music. With the success of their third album“Moving Cluster”they started being recognized by critics. Lately they are also working in the field of theater and dance.

Graduated from the School of Audio Engineering In Amsterdam in 1994. Having worked with image and sound for theater, film, television and fine art, his recent projects involve interactive imaging, multimedia programming, and interface between computers and physics. He has exhibited and performed in many countries around the world.

Started dancing at the age of 16. While studying at Japan Women’s College of Physical Education, Kawamura won the Outstanding New Artist Prize at Yokohama Dance Collection 2011. She has participated in international festivals in Korea, Poland and Vietnam, and has done international collaboration projects in Romania, Finland, and Croatia. She is a junior fellow of the Saison Foundation for the fiscal year of 2013-14. Most recently she won the Next Generation Choreography Award and the Audience Award at the Toyota Choreography Award this year.

Director of the non-profit organization Domino. While studying journalism at the University of Zagreb, Dobrovic started his career as program coordinator at the Eurokaz theater festival. He launched the Queer Zagreb festival in 2003, and started the Perforacije in 2009. Currently he works as program director and curator for various international projects.