A person stands in front of others. Taking each element of this very ordinary, yet extraordinary event as my theme, I make performances that consist only of fundamental movements such as standing and walking.
Through my performances, I address the issue of the continuing “long take” of our lives, prior to the events that arise on stage.

Born in 1990, Gunma Prefecture. Graduated from Musashino Art University Department of Imaging Arts & Sciences in 2013. He completed “Things similar but different to theater” course at Bigakko in 2017, during which time he studied under the actionist Kubikukuri Takuzou to learn about physical expression and its perspectives.
In 2015, he established his current performance format and in 2017 he began to perform every day with or without an audience. He continues to do so today.
Solo performances to date include “a figure at noon” (TPAM 2019) and “Touching an Elephant” (2018). In 2020, he held a lecture on performance art methods at Bigakko called ［Creating a Cane］ (co-organizer: Takumi-chan). He is also actively involved in exchanges with artists of his generation and the revitalization of the performance scene through participation in the performance platform Stilllive (organized by Yuki Kobayashi) and PORT (organized by Saori Hala), a mutual study group for artists dealing with physical expression.
In addition to his own performances, he has appeared as an actor and dancer in works by Akumanoshirushi, Yasunori Ikunishi, Megumi Kamimura, and Aya Momose. Alongside his activities as a performer, he also works as a project manager at an IT company, creating and improving websites for financial institutions and major e-commerce sites. By continuing his performances in daily life, he ponders and implements the role and relationship of physical expression in society and life. 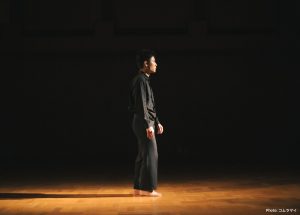