Suspending the activities of his highly successful “Mizu to Abura” company in 2006, Shuji Onodera went to Paris to study for one year, and the way he works since his return home the following year explains his sudden departure from his successful company. Inviting a wide variety of unique, skillful stage performers to collaborate has opened up new horizons in his work. Not only is he polishing the choreographic techniques he had learned at Mizu to Abura but he is also acquiring a sense of scale as well as fine texture and depth in his recent works, which include: Kuhaku ni Ochita Otoko (A Man Fallen into a Void), Ihoujin (The Stranger), Arakajime (In Advance), and Oedipus. The Red Shoes is a collaborative work with a team of artists from overseas as well as the unforgettably unique Japanese actress Hairi Katagiri, one of the regulars in Onodera’s recent works. It will be interesting to see how the overseas performers will be interpreting the choreographer’s pantomime-based, highly demanding fast-slow movement techniques. This will also be an excellent opportunity to see the heights Onodera has reached after the series of adventures he has been through. (Tatsuro Ishii, Dance Critic)
Direciton and Performance: Shuji Onodera
Performers: Hairi Katagiri, Sophie Brech, Momoko Fujita
Set Design: Nicolas Buffe
Assitant Director, Interpreting： Yuriko Hoshina
Assistant Director, Understudy： Hikaru Tsutagawa
Text：Akane Yamaguchi
Lighting Design： Yukiko Yoshimoto
Lighting Operator： Hiroyuki Ito
Sound Design： Naohiro Inoue
Sound Operator： Nobu Ikeda
Costume Advisor： Kyoko Domoto
Costume Assistant： Chiharu Oikawa
Stage Manager： Yuji Shirosaki
Stage Manager Assistant： Chinatsu Iwaya
Production Support： Chika Onozuka 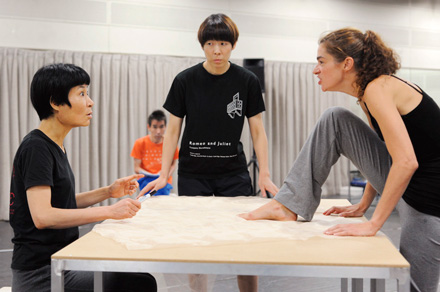 Director. After having studied pantomime at the Japan Mime Institute, Onodera co-founded and worked for the performance theater company “Mizu to Abura” from 1995 to 2006. He went to study for one year in France as an awardee of the Cultural Agency’s Program of Overseas Study for Upcoming Artists. Upon his return in 2007, he founded his own group, Company Derashinera. His unique style of pantomime-based choreography mixed with texts has gained popularity among a wide range of viewers. His main works include Arakajime (In Advance), Oedipus and The Brothers Karamazov. Not content in staying within the theater walls all the time, he took Romeo and Juliette and Ningyohime (The Mermaid) outdoors. In addition to his own productions, Onodera is also increasingly popular for his staging and choreography for other musical and theater productions, winning him the 18th Yomiuri Theater Award for Best Staff in 2011.
www.onoderan.jp