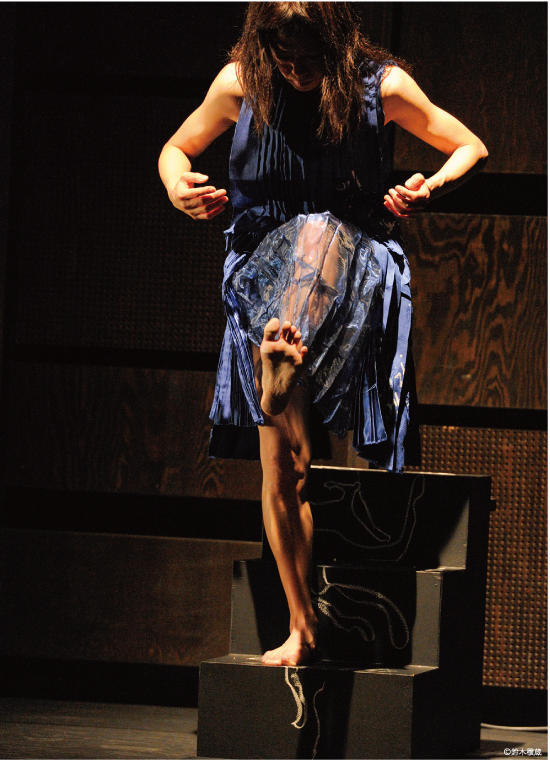 A long-awaited re-staging of a piece that has overwhelmed audiences right from its debut in 2011. It explores the meaning of native language and home through the ties of words and body.

【Dance ZANMAI Program】
The DNA 2016 festival will open with works created by three artists who are key forces behind the contemporary dance world in Japan: a new piece taking “family” as its theme and the second by Physical Theatre Company GERO, which was launched by Kim Itoh in 2015 and is attracting great attention; another by TOKYO ELECTROCK STAIRS led by KENTARO!!, who remains vigorously involved in creative activities spanning the genres of dance, music, theater, and art; and a re-staging of DICTEE, a piece created by Un Yamada which has wowed audiences inside and outside Japan since its debut in 2011. The opening program is a sumptuous one allowing dance lovers to feast their eyes on all three of these works on the same day.
Choreography, Direction, Dance: Un Yamada
Text: 『DICTEE』Theresa Hak Kyung Cha
Costume: Yuko Ikeda (Luna Luz)
Lighting: Yukiko Sekina (Gureko house)
Stage Management: Yoshiko Haraguchi (molibuden)
Production: Toshiko Uehara (Co. Yamada Un)

Choreographer and dancer Un Yamada produces and stages works in Japan, other Asian countries, the Middle East, and Europe, mainly through the dance troupe Co. Yamada Un, which was founded in 2002. She also engages in collaborative projects linked with the spheres of music, art, academic, and traditional arts; choreographs exercises by rhythmic gymnasts, and coaches casts of plays and opera in movement and gesture. She was awarded the 8th Japan Dance Forum Grand Prix in 2013 and the New Artist Prize in the 65th Minister of Education, Culture, Sports, Science and Technology Award for Fine Arts in the dance category in 2014. She was also appointed to the position of Japan Cultural Envoy by the Agency of Cultural Affairs in 2016.
http://yamadaun.jp