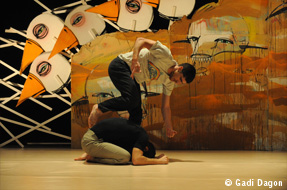 The ongoing struggle between Israelis and Palestinians knows no bounds, it leaves no clues. What can dance, absent of rhetoric, do to address this issue, or intervene? <Quiet> is a rare work which does confront such an intractable issue, precisely because it never ventures into propaganda. Even in Israel, one of the most prominent places in the world for dance, it stands among the few examples of work which both explores the potential of what the body can and cannot do, without ever referencing entertainment. Beyond optimism and pessimism, what is there to do but pray? (Tatsuro Ishii, Dance Critic)

Born in 1979 in the former USSR, moved to Israel in 1990. After he danced for Batsheva Dance Company and Yasmeen Godder Dance Group, Zaldes began working as an independent choreographer in 2004. Currently he lives and works in Tel Aviv. He has received various awards including Israel’s Ministry of Cultural Affairs’ Prize for young artist of the year in the fields of dance in 2008, 2009 and 2011 the Kurt Jooss Award for <Solo Colores> in 2010 as well as other national and international prizes. He has been working in diverse communities I focusing primarily on the Arab sector in Israel. For two years Zaides initiated New Dance Project at the Performance Art Arena in Jerusalem together with the choreographer Anat Danieli and is continuing to develop platforms for young choreographers.
www.arkadizaides.com/