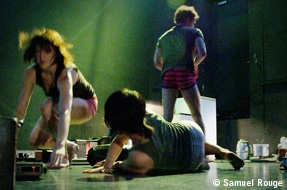 In center front stage are home electronics; a fan, an iron… lined up tightly abutting one another. They are repositioned, lined up anew, invading front stage as if they were breeding. Three performers move these consumer items, emotionally detached yet restlessly, as the stage narrows by degrees. …These actions, which sound so unconvincing in words, create rhythm and cadence, as the transportation and relocation of these bulky of inorganic materials is articulated. At some point the border between dancer and gadget, between living and inorganic matter, becomes ambiguous, and a kind of chaos within order seems to approach, and with it a feeling similar to illusion. Quite a mysterious piece. (Takao Norikoshi, Dance Critic)

Born in South Korea, YoungSoon Cho Jaquet studied dance in London, and is currently based in Lausanne, Switzerland. She has created several works in Switzerland, UK and South Korea. Her style is defined mainly by three elements: involvement of the audience; bridging between Asian and Western arts; and focusing on memory and origins. Her unique relationship to materials and sensations serves as a link between these three central themes. She was an associated artist of the far° Festival des Arts Vivants, Nyon in Switzerland from 2008 to 2010. She has received the Young Talent Award from the Fondation Vaudoise pour la Culture in 2011; and the Régionyon Award for Cultural Mediation in 2011.
www.cienuna.com/