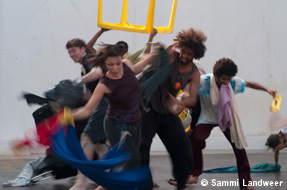 The <POROROCA> are waves up to four metres high which travel as far as 13 km inland up the Amazon River. This piece was was created in the Maré favela of Rio de Janeiro. At the base of this work lies serious questions of how people can survive in a swirling chaos of poverty, violence, crime, and inequal opportunity. The 11 dancers provoke the audience, and the audience is swept up into in the Proroca swirl. Advance! We must go to meet them there!
(Atsuko Hisano, Program Director, The Saison Foundation)

After studying ballet in Sao Paulo, Lia Rodrigues established Andançca Dance Group in 1977. She danced for the Maguy Marin Company from 1980 to 82. On her return to Brazil she established her own Lia Rodrigues Companhia de Danças in Rio de Janeiro. She produced and choreographed all the works for the company, and received numerous awards both in Brazil and overseas. She directed the dance festival Panorama Rioarte de Dança from 1992 to 2005. Recently she set up her company in the Favela de la Maré the largest slum in Rio de Janeiro, where she is developing various arts and educational projects and has opened in October 2011 the dance school named “Escola livre de Dança da Maré” (Open dance school of Maré) in Centro des Artes de Maré.
www.liarodrigues.com/

In partnership with REDES de Desenvolvimento da Maré and with the support of Espaço SESC – Rio de Janeiro-Brésil and the Fondation Prince Claus for the Culture & Development.

The Lia Rodrigues Companhia de Danças is commissioned by Petrobras whith support from Petrobras Cultural Program and the Cultural Ministry in Brazil for the running of the company.