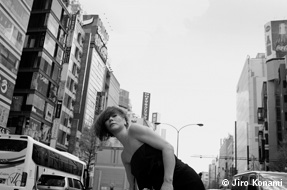 The musician and the dancer are equal in the sense of expressing with one‘s body on stage. Tomoko Mukaiyama is not only a pianist but also works in installations and with moving image works, as well as in her collaborations with dancers. Her piano work touches on life in various phases; on pain and sensuality. The choreographer Beutler’s work varies from the minimal to throaty singing solos to collaborations with puppet masters. The guest dancer Rooiji has won numerous awards. We can only wonder what manner of chemical reactions they will create together. (Takao Norikoshi, Dance Critic)

Tomoko Mukaiyama
After winning the first prize at the Dutch Gaudeamus piano competition in 1991, Tomoko Mukaiyama has worked as a pianist with prestigious orchestras and ensembles around the world. She has also collaborated with film directors, designers, architects, photographers and choreographers such as Ian Kerkhof, Marina Abramovic, MERZBOW, Kim Itoh and Jiří Kylián. Since 2000 Tomoko Mukaiyama received acclaim as a visual artist, exhibiting installation works such as ‘for you’ at Yokohama Triennale in 2005 and ‘wasted’ at the Echigo-Tsumari Art Triennale in 2009. She composed music for Club Guy and Roni’s new piece <Four Walls>. In 2010-11, she showed her installation performance called <SHOES>.
www.tomoko.nl

Nicole Beutler
Since graduating from Amsterdam’s School for New Dance Development (SNDO), the ground-breaking choreographer and curator Nicole Beutler (Munich, 1969) has played an important role in Dutch dance and performance. Beutler’s initiatives are many and varied: she directs for the stage, publishes books, and advances discourse and contextualised activities. She frequently collaborates with artists working in disciplines outside her own, including puppet theatre maker Ulrike Quade, physical theatre company Kassys and the filmmakers Helena Muskens and Quirine Racké. Beutler’s work is performed internationally at leading festivals and theatres, including Sadler’s Wells, London; Otoño and Primavera, Madrid; and Side Step Festival, Helsinki.
www.nbprojects.nl

Jean Kalman
Jean Kalman, born in Paris, has worked as a lighting designer for the theatre and opera since 1979 in France, Great Britain, Germany, The Netherlands, Italy, the United States and Japan. In 1991 he received the Lawrence Olivier Award for best lighting designer. He has worked on the creation of installations with, among others, the composer Heiner Goebbels and the artists Christian Boltanski (Winterreise, Les Belles endormies), Karel Appel and Georg Baselitz.

Created in collaboration with the dancer : Mitchell-lee van Rooij

This production is being made by : Tomoko Mukaiyama Foundation and nbprojects in coproduction with Dance Triennale Tokyo, Holland Festival (Amsterdam), DeSingel (Antwerp), Grand Theatre Groningen and supported by the Artist in Residence program of Tanzlabor_21 / Tanzbasis Frankfurt_Rhein_Main.