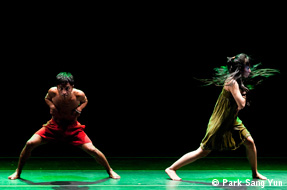 Hailing from the Papua province of Indonesia, Siompo works from a unique Asian corporeal technique “Animal Pop”, merging behaviors from Indonesian tradition and global hip hop. Who could have anticipated such a convincing hybrid of hip hop and kangaroo movements? Siompo charms with a rich continuity of powerful, brilliantly cacophonous, and frequently hilarious choreography. In recent years his Japanese collaborators include Natsuko Tezuka and Contact Gonzo. (Atsuko Hisano, Program Director, The Saison Foundation)

Born in 1975 in Jayapura, Indonesia. As a child Jecko Simopo learned traditional Indonesian dance, and after high school, he went to Institut Kesenian Jakarta to continue his studies in dance. In 1999 he visited Portland, Maine in the United States where he studied hip-hop. In 2002 he went to Folkwang Dance Studio in Germany on scholarship from the Goethe Institute in Jakarta. In the recent years, while traveling extensively around the world representing the Indonesian contemporary dance, he creates works produced and co-produced by theaters and institutes such as Kampnagel in Hamburg, Berlin HAU, the Goethe-Institute in Jakarta, and the Esplanade in Singapore. 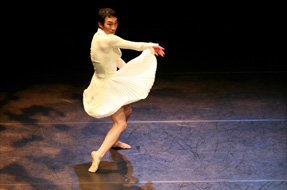 Choi Jin-han, known from the film “I want to make you happy”, dances. No matter how hard you call, or how hard he tries to please, can it possibly shorten the distance between performer and audience? Just because I make you laugh, does that mean we really connect with one another? S/he keeps dancing and asking, mixing happiness, pleasure, sadness, and anger. The tone of the piano, the live sound of the haegeum accompany Choi’s emotions. Originally known as a distinguished dancer and choreographer, this is one of Choi’s most acclaimed works. (Atsuko Hisano, Program Director, The Saison Foundation)

Graduated from the Dance Department and the Graduate School of Arts at Hansung University (major in choreography). He has worked as a dancer and also a choreographer in many dance groups and projects both in South Korea and overseas. He has won numerous awards including: the Rookie of the Year at the 20th Dance Concours organized by the Modern Dance Association of Korea in 2000; and the Seoul International Choreography Festival 2011, Solo & Duet Section, Jury Prize for <I want you to be happy> in 2011, among many others. His work pursues active communication with the audience. He starts with the statement that perfect communication among human beings can never exist. However, during the performance, he continuously throws questions on true communication and tries to narrow the gap between the audience and himself. 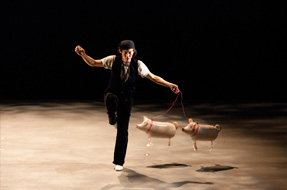 Ryohei Kondo‘s first duet in two years, the latest in a series following <Melody Fair> (1999), <Watashi no Koibito> (2004), and <Watashi no Aijin> (2010), this new piece is a direct, “pop”, and cute meditation on love. What sigh-inducing dazzling love worlds to encounter?! Kondo, active in the theater, on film, and as an author, still within the great breadth of his work, he confirms that his duets are an important core at the origin of dance. Grasped by the exciting world of Ryohei Kondo! Bound to the thrill of dance! (Atsuko Hisano, Program Director, The Saison Foundation)

The director/choreographer of the Condors Company who creates dance and comedy spectacles in the Japanese black school uniform. The company has toured over 20 countries around the world to date. Kondo is also a popular character in the Japanese TV programs including NHK’s “Salaryman NEO”, “Karada de Asobo (Let’s Play with the Body)”, the opening of the NHK’s TV drama series “Teppan”. He has done choreography for the films “Yattaman” by Takashi Miike and “The Little Prince” with Aoi Miyazaki as the main actress. Recently he made debut as an actor in NODA MAP’s <The Bee>, directed by Hideki Noda, followed by another film yet, “Buta ga Ita Kyoshitsu”. Kondo teaches dance at Yokohama National University and Rikkyo University. He received the 4th Asahi Performing Arts Award Terayama Shuji Prize. He was brought up in South America, and loves dogs.
www.condors.jp/